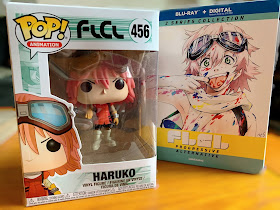 Adult Swim’s popular anime series FLCL: Progressive and FLCL: Alternative, have both been released for the first time ever as a Blu-ray combo pack from Warner Bros. Home Entertainment on February 4th

FLCL: Progressive & Alternative Combo Pack includes a 15-minute never-before-seen documentary about the making of both seasons including interviews with the voice actors. Additional special features include “Meet the Creators”, “The Pillows”, a look at the English voice actors behind FLCL, and a look into the production of FLCL: Alternative.

The sequel to the 2001 original FLCL, FLCL: Progressive tells the story of 14-year-old Hidomi and her classmate, Ide, as the war between Medical Mechanica and Fraternity continues. Now in the form of their teacher, Haruko Haruhara returns alongside another otherworldly being, Jinyu, a gorgeous Chrysler Bel Aire and her yellow Vespa to unleash their hidden potential.
FLCL: Alternative is the third and final season and it centers on the misadventures of 17-year-old Kana and her friends, Mossan, Hijiri and Pets. Living a seemingly normal life, the group’s lives are flipped upside down when Mecha falls from the sky and arrives with the guitar-wielding Haruko Haruhara. Once again determined to take out Medical Mechanica, Haruko works to awaken Kana's N.O. channel before the relentless iron takes over the world.

Along with the release of the combo pack, comes the character vinyl figures from Funko.
And if you are in the Altoona Pennsylvania area on June 12-14th, you can pop into Sci-Fi Valley Con and meet Kari Wahlgren, the English voice actress who does the voice of Haruko.

Pick up your copy of FLCL: Progressive & Alternative as well as your Haruko Funko Pop Vinyl TODAY